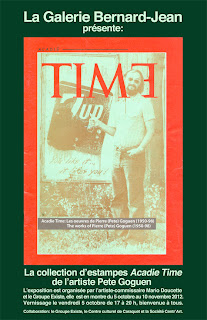 ﻿MONCTON, June 1 2012 – Celebrating ten years of the Sobey Art Award focusing on the excellence of young Canadian artists, the Louise and Reuben- Cohen Art Gallery presents a group exhibition titled Sobey Art Award: 10 Years of Atlantic Finalists. Organized by the Art Gallery of Nova Scotia, the show features the work of eight artists that have been selected over the years to represent the Atlantic region in this national competition. The opening will be held on Wednesday, June 13, at 5 PM. Sarah Fillmore, chief curator at the Art Gallery of Nova Scotia, will present the work included in the exhibition at the start of the evening.
﻿﻿﻿﻿﻿﻿

Established in 2002 by the Sobey Art Foundation, the Sobey Art Award has become an important recognition for Canadian artists. This distinguished award is given annually to an artist 40 years and under and comes with cash prizes of 70 000 $: 50 000 $ goes to the recipient, and 5 000 $ to each of the four remaining regional finalists. For ten years, this award has contributed to a better knowledge and appreciation of contemporary artistic expression in Canada. The nominated and shortlisted artists benefit from a critical examination of their work and an increased national awareness. Throughout all parts of the country, this enhanced visibility offers a showcase to artists that have accomplished a strong visual expression, but who may have been underrepresented in the past. Based on a rigorous curatorial selection, the Sobey Art Award also provides a standard of artistic excellence and validates the artists’ research and processes.

Sobey Art Award: 10 Years of Atlantic Finalists will be on show until September 9 2012. The opening on June 13 will be held concurrently with the opening of a travelling exhibition from the Acadian Museum of Prince Edward Island titled Island Acadian Women presented at the Acadian Museum of the Université de Moncton. The Louise and Reuben-Cohen Art Gallery is located at 405 Université Avenue, in the Clément-Cormier building on the Université de Moncton campus. Gallery hours are 10 AM to 5 PM weekdays, and 1 PM to 5 PM on week-ends. Admission is free. For more information, please contact us at (506) 858-4088, or by email at galrc@umoncton.ca. For up-to-date information, «Like» us on Facebook or visit us at www.umoncton.ca/umcm-ga.


Canada is the second largest country in the world by area and boasts both a vibrant nationwide arts community and a strong public commitment to culture. And yet Canadian contemporary art has not received widespread attention outside Canada's borders. The largest survey of contemporary Canadian art ever produced outside Canada, Oh Canada features work by more than 60 artists who hail from every province and nearly every territory in the country, spanning multiple generations and working in all media. MASS MoCA's curator Denise Markonish spent the last three years crisscrossing Canada to view hundreds of exhibitions in museums and galleries, visiting over 400 artists' studios, and making connections with a full range of artists working in Canada today.

Markonish's extensive research brings this project the fresh perspective of an informed and curious outsider. While Oh, Canada will ask questions such as "What are some of the distinguishing characteristics of art made in the country?" its aim is not to present a merely nationalistic show. Rather, the goal is to encourage a dialogue about contemporary art made in Canada (one touching on issues of craft/making, conceptualism, humor and identity), a dialogue that will resonate just as deeply for Canadians as for outsiders.

The exhibition will be mounted in the 14,000 sf comprising MASS MoCA's first floor galleries, as well as additional indoor and outdoor spaces. From an initial list of over 800 prospects Markonish narrowed down her list, focusing for the most part on artists who have shown less frequently in the U.S. The artists participating in Oh, Canada include:

The first work visitors will encounter at the museum will be Kim Adams’s Optic Nerve, a car that has been altered to glow from within like a giant lamp. A new massive outdoor commission by Michel de Broin will use full-sized picnic tables as its basic building element, while another new work by BGL will be comprised of crowd control barriers snaking 140 feet up MASS MoCA’s iconic clock tower.

Visitors will find new work from Gisele Amantea, who will create a densely patterned abstraction re-conceiving the foyer of MASS MoCA’s Hunter Center for the Performing Arts. In the lobby, viewers will encounter work by Rita McKeough and new songs by the Cedar Tavern Singers (who will record new songs based on Canada’s arrival in the Berkshires). In the main galleries, John Will’s new text-based piece will include the names of all the artists from the exhibition.

Ten other new commissions will join 95 already existing works (made within the past five years) for the exhibition including: Micah Lexier’s A Coin in Every Corner comprised of a series of specially minted coins painstakingly installed in corners throughout the multi-building factory campus; Kent Monkman’s double diorama based on fictitious buddy characters Tonto and the Lone Ranger, and Germany’s Winnetou and Old Shatterhand; and Ed Pien’s installation made from cut paper and projected video; and new work from Terrance Houle, Divya Mehra, Graeme Patterson, Garry Neill Kennedy, Mitchell Wiebe, Craig Leonard, Janice Wright Cheney and David Harper.

The exhibition will also be accompanied by live events at MASS MoCA focusing on Canadian acts.