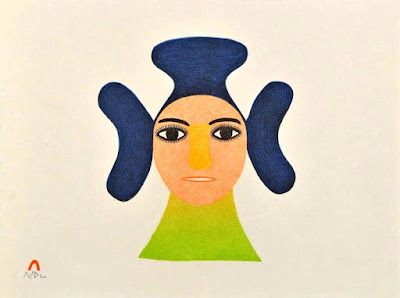 The Galerie Sans Nom is very excited to announce the return of the Souper Sans Nom! This series of creative intimate dinners are inspired and surrounded by artwork in the gallery! This partnership with chef Michel Savoie of Les Brumes du Coude involves food and wine with art exhibitions and will take place in the gallery itself with the artist present. The next dinner will take place on Thursday July 28 at 7PM inside Mario Doucette's exhibition entitled Harias.

These suppers are fundraisers for the Galerie Sans Nom. Each ticket costs $50 and includes food and a charitable donation tax receipt for $40.

Tickets are limited so call or email to save your seat!
direction@galeriesansnom.org
854-5381
Publié par Mario Doucette à 22 h 54 Aucun commentaire:

Mario Doucette presents new works in painting, printmaking and sculpture while transforming the space of the Galerie Sans Nom into a period museum.

Visiting Artists Exhibition: Mario Doucette & Liza EurichArtist Talks: Friday, June 17, 2016, 6:00 – 7:00 PM
Opening Reception: Friday, June 17, 2016, 7:00 – 9:00 PM
Exhibitions on display until July 16, 2016
Each year Open Studio selects four professional artists with or without printmaking experience to create traditional and/or experimental works in the print medium of their choice, working collaboratively with a print media artist. The Visiting Artist Residency, in operation since 1983, is a popular program that receives applications from artists from around the world. In conjunction with the residency, each artist exhibits the work produced during their period in the Studio, and gives an artist talk. These exhibitions are the result of this intensive work period. The second of two Visiting Artist exhibitions will features work by artists Mario Doucette and Liza Eurich. The accompanying brochure, with essays by Jennifer Winter and Kendra Ainsworth is available here.
Mario Doucette: Dispersions
Mario Doucette is an Acadian artist from Moncton, NB. He is a painter, but also works with video, digital animation, performance and Super8 film. In 2004, after a residency in the French village of Brouage, he created Histoires, a series of works combining drawing and painting that reflects on the effects of colonialism. He has been featured in many exhibitions in several Canadian museums and galleries, notably at Toronto’s ROM where he was a Sobey Art Award finalist in 2008. He recently contributed work to Oh Canada in 2012 (MASS MoCA, North Adams, MA), The Painting Project in 2013 (Galerie de l’UQAM, Montreal, QC), and Shine a Light: Canadian Biennial in 2014 (National Art Gallery, Ottawa, ON). He is currently working on a new series of paintings and sculptures called Harias. Mario Doucette is represented by Galerie Division (Montréal/Toronto).
Doucette has recently transitioned towards oil painting to further immerse himself in the genre of history painting. Painters historically understood the value of printmaking, and many fostered close relationships with printmakers in an attempt to spread their work and fame.
Raphael, for example, was not a printmaker. Instead he collaborated with Marcantonio Raimondi, an Italian engraver known for collaborating with many artists. Raphael’s paintings were well known in 16th century Italy. But his international reputation largely came from Raimondi’s reproductions of his paintings. The distribution of Raphael’s prints spread far more widely and thus his original paintings were made famous.
It is this type of collaborative work that Doucette is undertaking during the Visiting Artist Residency program at Open Studio, working with a skilled printer using intaglio printmaking techniques to reproduce compositions from recent paintings. This method of dissemination was popular before the invention of colour photo reproductions, however, for this project, Doucette will produce prints with elements of originality rather than exact photographic reproductions of my paintings.
This project also involves an ongoing attempt to further Doucette’s research on the art of propaganda. His work stems from the hypothesis that history is a lie that no one ever questions. Often artists were obligated to convey an official message, sometimes largely tainted by political motivations, thus evoking an incomplete version of the facts. This is certainly the case of the artists who represented the history of the Acadians in Canada. It is a history that is often a one-sided perspective from a Colonial British viewpoint, which presented the Acadian population in terms of a problem that needed to be solved. The residency at Open Studio adds to the series of works that presents a new version of history, shedding light on our colonial past, reframing key figures and exposing false ideas.
Mario Doucette’s residency is supported by the New Brunswick Arts Board.
Open Studio
401 Richmond St. W, suite 104
Toronto, ON M5V 3A8
416-504-8238
Publié par Mario Doucette à 19 h 24 Aucun commentaire: 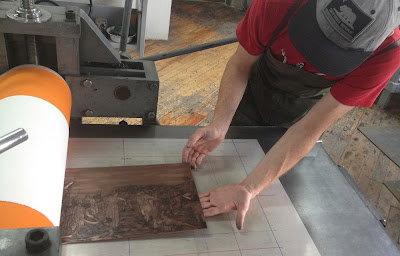